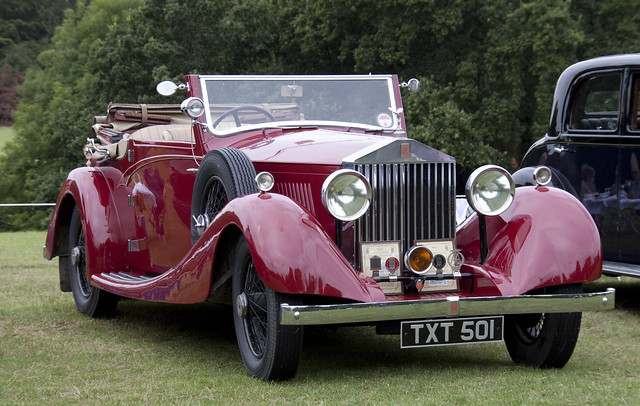 Many car enthusiasts regard Rolls-Royce as the ultimate symbol of craftsmanship, refinement and extravagance in motor cars, regardless of how expensive their vehicles may be, and the history of this legendary company continues to fascinate.

Where it all began

Rolls-Royce had its origins back in May 1904, when talented engineer Frederick Henry Royce had lunch with a man named Charles Rolls, a car dealer and part-time racing driver. The two liked each other’s ideas in regards to a new motor vehicle company, immediately coming to a business agreement. The partnership was formalised two years later in 1906 and Rolls-Royce Limited was created, with the financial support and business acumen of Rolls combining perfectly with Royce’s technical expertise and engineering skills. The first “Roller” produced was the Rolls-Royce 10hp, which debuted at the Paris Salon show in 1904, but it was in 1907 that the company really made its name with the Rolls-Royce Silver Ghost 40/50. The 40/50 was powered via a 7.0-litre straight-6 engine within a 4-passenger chassis that was painted silver, and cemented its then reputation as the world’s best car by performing a completely faultless run of no less than 14,371 miles. However in 1910 Charles Rolls died at a flying display in Bournemouth.

Moving into the US

After World War I, the demand for the Rolls-Royce only increased and in 1921 the British carmaker opened their very first factory in the United States where their vehicles were seen as a display of elegance of wealth amid the ‘Jazz era’ and the nation’s growing economy. Ten years later, when Bentley proved unable to survive the Great Depression, Rolls-Royce was able to buy out its biggest rival, something that ultimately benefited both brands and, aside from minor details and the radiator grille, the two would often share the exact same parts for the next 70 years. Sadly Royce himself died in 1933.

Following the end of World War II, new Rolls-Royce plants were opened in Cheshire and Crewe, joining its Derby facility, with Crewe becoming the formal home of the company as of 1946, and where all bodies would be made in-house (except the Silver Wraith, which continued to be made by outside contractors until 1959). The 1950s and 60s proved a prosperous period for Rolls-Royce, beginning a long standing association with Britain’s Royal Family and also becoming the car of appeal to celebrities, including actors and pop stars. 1965 saw the unveiling of the new slab-sided Silver Shadow, the first Rolls to come with a monocoque chassis. However the decline of the automotive industry in the 1970s hit the company hard, with Crewe’s Rolls-Royce Motors separating from Derby’s Rolls-Royce Limited, only for the revived firm to hit back with new vehicles such as the Corniche and the Silver Shadow II. Vickers bought out RRM in 1980 and produced new models such as the Silver Spur. Rolls-Royce went up for sale again in the 90s, eventually being bought by Volkswagen.

In 2002 Rolls-Royce separated from Bentley, but a new dawn arrived for the former with the much anticipated Phantom, which was soon followed by the likes of the Phantom Extended Wheelbase, Phantom II, the Phantom Coupe and the Drophead Coupe. In 2014 the company launched two new models, the Wraith and Ghost II series, ensuring that the Rolls-Royce legacy will continue to be around for many generations to come.

This entry was posted on Thursday, October 25th, 2018 at 6:28 am and is filed under Car Makes and Models. You can follow any comments to this entry through the RSS 2.0 feed. Both comments and pings are currently closed.