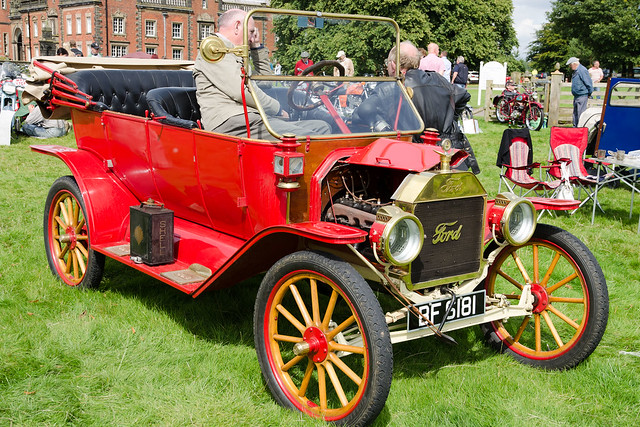 Young drivers are as likely to start with a well-loved Ford Fiesta as anything else – and have been for years! But have you ever wondered about the early days of0 this global name? Here we’ll take a look at the story.

Ford is the fifth largest maker of cars in the world. Henry Ford built the forerunner of the Ford motorcar in 1896, outside where he lived in Detroit. The site on which Ford built that car is now home to the Michigan building, which carries a plaque identifying it as Ford’s one-time home. Three years after he built his first car, Henry Ford opened the Detroit Automobile Company, later renamed as the Henry Ford Company. He gave up rights to the company in 1902 after a split with the people who provided him with financial backing, but granted them the rights to continue using the Ford name.

Once he’d left the company, Ford formed an alliance with Alexander Malcomson, who was a coal dealer who helped with financial backing. The company was called Ford-Malcomson, and soon ran into further financial difficulties when they were unable to pay their suppliers. The pair searched for new investors, and in the meantime convinced their creditors to accept some of their stock to cover the money they owed.

The incorporation of what was known as the Ford Motor Company took place in 1903. The company had a number of investors at that time who between them owned 1,000 shares in the business. By October of 1903, the company was showing a profit of some $37,000. Shareholders were paid dividends of 10% that year and a further 20% early in 1904. By the end of 1905, the company’s overall profits had risen to more than a quarter of a million dollars.

Following the rise in profits there were problems in the company, as only Ford and James Couzens (the company secretary) worked full time at the business. Eventually, Malcomson and Ford quarrelled over what direction the company would take, and Ford was thereafter subject to a number of lawsuits, which were eventually dropped in 1911.

The workforce turnover was quite high, and in 1915 Ford responded by doubling workers’ pay to $5 a day, while cutting shift times to eight hours, five days a week. The turnover of employees fell dramatically, but sales and profits increased, which meant that Ford could lower the cost of his vehicles. Suddenly, his factory workers could afford to buy their own car.

While the company struggled somewhat through two world wars and the depression era, it still kept going. Henry Ford died in 1947, and his son Henry II was president of the company from the end of 1945 until 1960, when he appointed Robert Macnamara as the new company president. The company had a balance of $22.9 billion at the end of 2012, and what Henry Ford created over a century ago continues to dominate the market today.

This entry was posted on Thursday, August 18th, 2016 at 7:11 am and is filed under Uncategorized. You can follow any comments to this entry through the RSS 2.0 feed. Both comments and pings are currently closed.