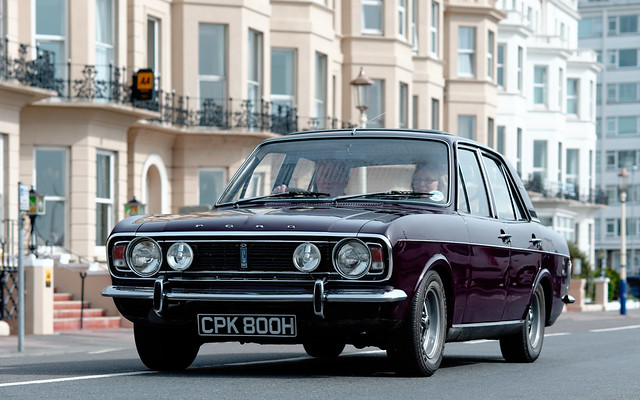 Once upon a time the Ford Cortina seemed to be the company car of choice for almost every sales rep or middle manager out there, but these days an Audi or a BMW are more likely to achieve that honour. However, there is no denying the history of uproarious success enjoyed by the Ford Cortina.

From saloon to classic

The Cortina was the best-selling motor vehicle throughout the whole of the United Kingdom for ten of the years between 1967 and 1981. This fantastic success story was partly fuelled by the growing demand for fleet cars that were efficient and reliable, and which came with a wide range of trim levels that suited everyone who was looking for luxury, be they company directors or junior executives. When it was finally replaced in 1982 by the Sierra, almost 4.3 million vehicles across five generations had been produced, over three million of which came from production lines in Dagenham.

The success came at a time when purchasing items made in Britain meant a lot to consumers, a far cry from the global marketplace of today. The Cortina wasn’t just the Best of British however, it was also a superb all-rounder. In addition to being more fuel efficient and lighter than its competitors, and offering unrivalled space within its class, it was also very affordable, costing as little as £537 when the standard 1200cc Mark 1 was first launched, back in 1962.

In a class of its own

The Cortina essentially created a completely new class, with vehicles such as the Vauxhall Cavalier beginning to muscle in on the expanding fleet market with huge success in 1975. The Cortina’s ubiquity in the driveways of middle class Britain was matched with success in motorsports, first in rallying, and then later in the field of saloon car racing. 1966 saw the introduction of the boxier mark 2, and a year later the legendary 1600E arrived, which remains highly desirable to this day, together with an estate that had a load capacity that led its entire class. The 1600E came with a tuned Kent engine, walnut door trim and dash, Rostyle wheels, and a sports steering wheel and seats. In 1970 the mark 3 arrived, and by 1972 it was the best-selling car in the whole of the United Kingdom, successfully beating the ageing Austin/Morris 1100 and 1300. The 2000E sported a superior dashboard complete with upgraded trim, ensuring the Cortina’s continued success.

Rust has always been the biggest problem with the Cortina, with corrosion being one of the main reasons that less than 1000 cars now survive, although this scarcity does mean that this icon of the 1970s is becoming ever more expensive to buy. The rarest of all the Cortina models is the Mark 4 from 1976, almost all of which were either wrecked in demolition derbies or rotted away due to rust. The Cortina’s last hurrah was 1979’s mark 5, which offered a minor facelift but had improved rust protection, and was again the best-selling car in the UK in 1981, until fleet sales began to be eaten away by the Cavalier. The last Cortina was produced in 1982 – the end of a stunning British success story.

This entry was posted on Thursday, June 28th, 2018 at 6:20 am and is filed under Car Buying Tips, Car Makes and Models. You can follow any comments to this entry through the RSS 2.0 feed. Both comments and pings are currently closed.